by Barbara Bier
in Uncategorized
0

The explosion in the city of Beirut, in Lebanon, the August 4th, resulted in more than 6.000 injured and 180 victims. The fact shocked not only the city, but the whole world as we saw the exact moment of the explosion through the videos that ran on the Internet.

There were many demonstrations of affection on behalf of the victims. Even in CrossFit®, as is the custom, the whole community has united in pain, to bear mainly the boxes in the area.

From this context a beautiful initiative was born; thinking of doing a tribute to the victims, the 9616 CrossFit®, located in Wissam Eid St. Tripoli, Lebanon, has created a Benchmark Wod.

And not only that: the idea is also to draw attention to fundraising to help families who are in difficulty!

Called "Beirut Tribute Wod“, The workout is a for time with easy skills and adaptable to all categories. 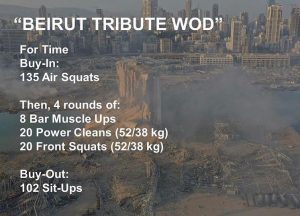 As a buy-in, the athlete must do 135 air squat, a number referring to the fatal victims at the time of this wod's creation. And as a buy-out 102 sit up, which refer to the number of people missing at the time of creating the workout.

To date these numbers have increased and then whoever wants to, can adapt the wod!

Even though it was done with the intention of doing good and helping those in need, many people complained on the official box page, saying they would do the WOD too soon. Most people, however, praised the initiative!

“Our country is going through profound pain. We mourn for our innocent souls, we pray for the thousands of wounded citizens and we are close to those who have lost their homes and belongings. The Beirut explosion shook our hearts, and for the first time in 40 years of constant wars and struggles, we felt like giving up on Lebanon.

Like 9616 CrossFit Community, we firmly believe that pain is inevitable, but suffering is optional. Therefore, we choose to revert to our Lebanese style of resilience and perseverance. 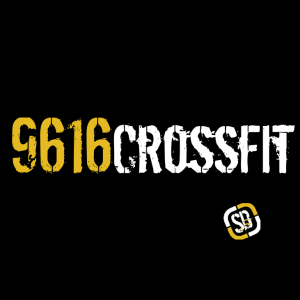 We appeal not only to all of our Lebanese athletes, but also to all CrossFit communities around the world, to join us in performing the WOD that our Box will present tomorrow in honor of our martyrs, medical staff, and fire, the Red Cross and all the Lebanese who year after year have chosen not to suffer and to move forward, regardless of the obstacles.

Don't forget to do our WOD and use the hashtags below to create a wave of hope for the healing of all ports in the world all the way to the port of Beirut where the tragedy occurred on August 4th 2020 at 18:08 pm.

If you want to help, you can check the link in our bio to donate to the Lebanese Red Cross @lebaneseredcross

On 4 August, a cargo of 2.750 tons of ammonium nitrate stored in a warehouse in the port of Beirut exploded, generating a shock wave that hit much of the Lebanese capital.

This explosion completely destroyed the port and its surroundings. According to estimates, the dead are over 170 and about 110 missing. The injured are more than 6 and 300 people are homeless.

Here is the video of what happened:

We have activated a lot of discounts on Amazon: from 30 to 70% on all sports categories! It's all on our dedicated channel ????
SUBSCRIBE HERE TO THE TELEGRAM CHANNEL

10 reasons that make you feel hungry all day

What is Kombucha: 8 beneficial effects for health

Chicken [nutritional values]: the number one ally for athletes