Back squat: cross and CrossFit® delight

Ask anyone (in the sports world, of course).

Lo squat with barbell on the back - the back squat - is the King of Exercises.

Now ask anyone who does it for the first time in long series.

He will answer you with moans of pain.

Back squat: cross and sportsman's delight 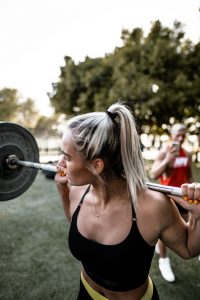 It is useless to get lost in the details, however much there are books that dedicate entire chapters to the back squat (the famous Starting Strength by Mark Rippetoe, for example).

Reach a rack - if necessary, chase away whoever is occupying it to do curl with barbell - load some discs on the barbell, wedged under it, lift it with the push of the legs and holding the core stiff, take a step or two backwards (no more, as it is a waste of energy), and squat for series and rep foreseen by your card.

Se suffer more or less in silence, it just depends on your attitude.

You are clearly not a girl, and the squat is "valid" if it reaches parallelor rather if it goes down a little.

Half squats and quarter squats leave them to powerlifters and experienced Olympians, who know what to do with them in training.

That's all? The technique in the back squat

The technical measures are, as for any multiarticular exercise, many. I summarize the most important, but each would need a dedicated article (I will ask to CrossMag.it  to let me do it, because it would be useful for everyone).

The benefits of barbell squats

Every advantage you can think of, the squat gives it to you. In particular: 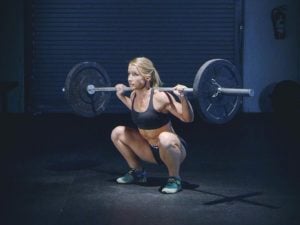 About the last point: the squat can be scary, because have a heavy load on your back it is destabilizing. When we do a lot of reps, with the heart beating wildly and the legs that want to shake, this feeling intensifies.

That's where you have to push harder, and get to the end of the series.

The squat is one of those exercises that build characteras well as the muscles.

But the squat hurts my knee

Adequate heating, excellent technique (it's not aeronautical engineering, but still needs to be refined), gradual loads and don't overdo it: squats are not a harmful exercise. There is talk of risks when loads become demanding.

Three curiosities about the squat

What is the difference between coach and head coach?

Calisthenics for beginners: how to start [and succeed]