Haley Adams is one of the fittest women in America and has shown what it's made of in the last Games. This year he decided to launch a Youtube channel all his to show behind the scenes moments of his athletic career.

"I am thrilled to announce the launch of my YouTube channel, which will give you a behind-the-scenes look into my life as a professional CrossFit® athlete", wrote on a teaser released prior to the start of the CrossFit® Games.

The first episode lasts 13 minutes and tells how she felt during the first day ai CrossFit® Games 2021.

“I loved the process [of being a CrossFit® athlete], but it's difficult and people don't see that,” she said.

Who is Haley Adams 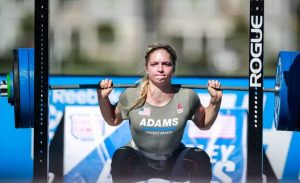 Haley Adams is 20 years old and has competed in all CrossFit® Games since 2016. She was the Fittest Teen on Earth in 2018, before making the leap to elite athletes the following year.

Her best finish as an elite athlete was in 2020, when she finished 4th overall.

“I've always been super competitive. I don't want to be outdone, ”she says.

After 7 years as a gymnast, here are some impressive achievements of Haley in the CrossFit® landscape:

When asked why she likes CrossFit® her answer was this:

“I like that it is constantly varied. It's something new every day. I constantly test myself. It never gets easier. It always makes me want to work hard. I intend to continue competing for as long as possible, as long as my body holds up, as long as it is healthy and I will feel happy ”.

In the first episode published on his channel, the athlete showed how difficult the first kayaking event was. He showed his burnt skin during the test.

Not only is Haley seen in the episode; there is another important figure who is essential in his life: his coach Tasia Percevecz, which is always present during the athlete's daily activities.

Tasia is very supportive and helps her stay focused. Obviously he also follows Haley on a nutritional level, especially in the competition periods, which mainly translate into a nutritional approach in favor of carbohydrates.

Her coach also believes that Haley had an impressive improvement on her first day of the event at the Games.

"Not only has she become physically stronger, but her mental level has also improved."

To date there are already the episodes 2, 3 and 4 in the channel, with full coverage of the world race, but the athlete will not stop there; he said he will publish training schedules and tips for all crossfitters who aspire to have his level of fitness!

Saxon Panchik's incredible transformation and 7 of his best workouts

Davidsdottir and the perfect handstand