Here we are guys! TheSanctional most anticipated event of the season: the Rogue Invitational 2021! It will be 3 days (until 31/10) of many emotions at the Dell Diamond Stadium in Texas.

The stadium has 12.000 outdoor seats and this time in addition to the CrossFit® event heats, we will also have one Strongman competition!

Rogue Invitational 2021: how to attend

The whole event will be streamed live on the channels Rogue Fitness YouTube, starting from today at 18:00 (Italian time).

And see what awaits you:

A total of 40 athletes - 20 men and 20 women - have been invited to compete in the elite CrossFit® competition, including defending champion Patrick Vellner and Tia-Clair Toomey-Orr, four-time Fittest Woman on Earth®.

In Legends division, nine men and seven women are confirmed in the list, like the four-time Fittest Man on Earth®, Rich Froning.

The race of Strongman features 10 of the best athletes in the sport, including four times the strongest man in the world (WSM) Brian Shaw and current WSM champion Tom Stoltman.

Strongman at the Rogue Invitational

The Strongman inaugural race at the Rogue Invitational has the highest prize pools of any strongman competition in the history of the sport.

The first place winner will receive over $ 130.000 at the time of publishing this article (the prize increases with the sale of tickets) and all 10 athletes will walk away with a minimum of $ 4.000. 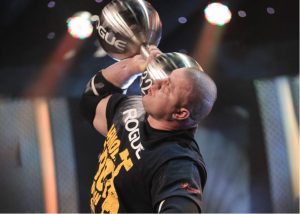 The 10 athletes on the list are i best athletes in the category. Four of the 10 men on the list have already won the WSM competition (Brian Shaw, Tom Stoltman, Oleksii Novikov, Martins Licis), two others made the WSM podium (Mateusz Kieliszkowski, JF Caron), and all but one made it to the WSM final - Rob Kearney is the only exception.

Also, the race Rogue Invitational Strongman presents the long-awaited return of Martins Licis to competitions after several years, just back from one of the latest injuries that have plagued him in recent times.

The competition will consist of five events spread over two days.

The Wheel of Pain

The overall winner will receive over $ 250.000. As with the Strongman competition, all athletes will go home with money in their pockets, as all entrants are guaranteed $ 5833.

The award for the CrossFit® Legends competition has not been announced. 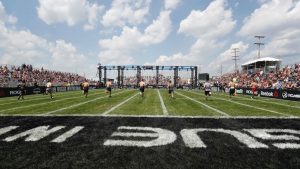 A total of seven events spread over three days make up the Rogue Invitational 2021.

Pull the wheelbarrow up to "Zeus" (Rig Rogue)

The final event of the Rogue Invitational 2021 will remain a mystery until the time of competition.

The Legends event schedule has been released, but the details of the three events have not. There will be one event on each day of the competition, from 29 to 31 October 2021. 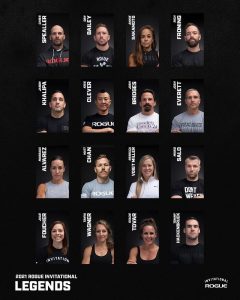 Khalipa is the current champion of the Legends division, taking first place overall in 2019.

Sam Briggs won the Legends in 2019, but this year he will compete in the elite division.

What are anthocyanins and why are purple foods so healthy?

Magnum Algida compared: which is the most protein?