At the end of 2019, CrossFit® Games veteran athlete James Newbury has revealed that he has gone completely vegan after following a plant-based diet for about four months.

It was a decision he had contemplated since 2013, as he disliked how animals used for food production were treated and wanted to contribute to a healthier environment.

Instead today, in 2021, five-time Fittest Women on Earth®, Tia-Clair Toomey and her husband and coach, Shane Orr, invited Newbury to their home for a full day of vegan food.

Toomey does not follow a vegan diet, but after a full day of tasting dishes prepared by his friend and colleague, this idea may seem like a future possibility.

Here is the video of their "vegan day" characterized by many bagels, almond butter, smoothies to gogo and much more:

Note: The video did not specify the breakdown of calories or macros for each meal.

This particular day was a recovery training for Toomey, so it was presumably easier to manage a distinct diet change while continuing to reach its macronutrients.

Think that during the Open season, Tia Clair Toomey trains up to five hours a day. That's a lot of activity, and the calorie needs to sustain it can be high.

Here is the breakdown of the macros to which Tia Clair Toomey hired during the 2020 Open:

Toomey normally gets its proteins from animals or animal products. Newbury facilitated the champion's day with a structured breakfast like the one she is used to: partly salty, partly sweet. 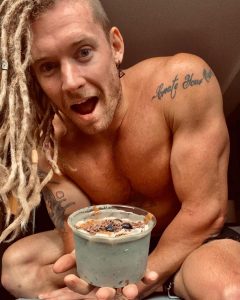 Newbury cut a bagel in half and spread almond butter on both sides.

The savory portion included alfalfa sprouts, sliced ​​tofu - referred to by Toomey as "bacon tofu" because of how Newbury sizzled it on the pan.

Tia livened up her dish with a few splashes of vegan hot sauce.

For the sweet part, Newbury added raspberry and banana jam in addition to almond butter. The meal ended with a handful of blueberries and blackberries.

Newbury received a lot of praise for the flavors it brought to breakfast, so the expectation of lunch was quite high.

In the video you can see him making smoothies consisting of:

In addition to the smoothies, he made a bowl of rice and Beyond Meat® (a kind of fake meat) topped with seared cabbage and chopped seaweed (nori).

“Very filling. Very satisfying. This is all you need in a meal. " Tia said.

They bridged the gap between lunch and dinner with a snack consisting of acai, mango, blueberries, raspberries, passion fruit, hemp protein powder and aloe vera mixed with oat milk.

For dessert, Newbury made one mousse of avocado in the blender inserting: four avocados, dark chocolate, salt and maple syrup (with the option of choosing vanilla or cinnamon).

He topped with raspberries, cocoa butter and cocoa powder.

Both Newbury and Tia Clair Toomey dislike eating six or seven smaller meals a day because they are less efficient and don't align well with their schedules.

The most important meals are cheaper (in their opinion). When asked if Toomey could become vegan, she replied in the affirmative:

Honestly, if James cooked for me every single day, absolutely yes.

Tia Clair Toomey felt full throughout the whole day of recovery training. Both she and her husband Shane were impressed with how much variety there was in James Newbury's meals.

It is not entirely clear whether or not Tia Clair Toomey will adopt a vegan diet in the future, but there is potential!

We'll see if her diet for the 2022 CrossFit® Games season will be the same as in previous years or if Newbury's cuisine inspired her to change… what do you think?

Anyway, we have activated a lot of discounts on our Telegram Fitness & Sport channel: from 30 to 70% on all sports categories! Find it all here ????

The best shoulder pads for CrossFit®? The right ones for you!

Omega 3: many benefits also for athletes

Who is the new owner and CEO of CrossFit® Inc?