All about the Squat: what it is for and its methods

by Barbara Bier
in Exercises
0

Loved by many and hated by many, it is squatting It is one of fundamental movements of CrossFit®, which is worth knowing perfectly for an optimal workout.

It is one of the few exercises that allow you to work several muscles together, i.e. the whole lower part of the body.

What is it for?

It serves to strengthen and shape the legs and buttocks. It can be considered one of the most complete exercises that exist, because it involves muscles, joints and tendons.

What do you train? 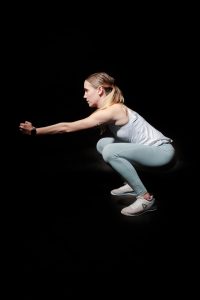 The squat is a functional and everyday movement. This is because we use it when we sit on a chair or to go to the bathroom, for example.

Those who manage to squat perfectly have greater hip mobility and greater strength in the lower muscle groups, i.e. in the legs.

The squat works the quadriceps femoris, glutes, hamstrings (posterior thigh), abdominals and lower back. When you strengthen these muscle groups, you gain more equilibrium when the body is in motion.

By adding a load in the upper part, the whole body will be in motion. You can hold a medicine ball over your head, use a barbell or dumbbells (we'll see below).

As you develop strength in your legs, it will be easier for you to perform daily movements such as sitting and getting up from the sofa or reaching down to grab something from the ground.

For this reason, this skill is suitable for both those who want define your body, both for those who just want to maintain an ideal physical condition for carrying out everyday activities.

If done correctly, the squat allows for chest expansion during its execution; as a result, there is an improvement in the respiratory capacity and benefits for the cardiovascular system.

But it is important to do the movement with the right technique: inhale by flexing the knees and exhale when you stand up!

As mentioned earlier, having stronger legs and buttocks allows us to achieve pelvic alignment and better spine posture.

The results are less back pain caused by poor body position during the day.

In addition to the traditional squat, there are other variations of the movement that help work specific areas of the body. Let's see the main ones:

Feet aligned to the shoulders, erect posture and look ahead.

Squat at maximum range of motion (as if to sit on a chair), without taking the heels off the ground and keeping the abdomen contracted. 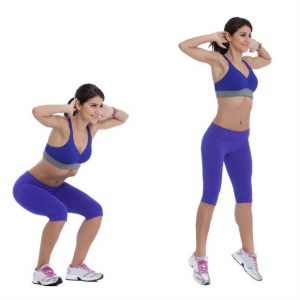 The knees must never go beyond the line of the feet! Return to the starting position by exhaling.

We made an article dedicated toair squat.Do not miss it!

Very similar to the air squat, this movement is performed in the same way as above with the difference that in rising from the squat you perform a jump (on the spot), and then come down to a sitting position.

Also called "King of Exercises", The Back Squat it must be done with the barbell on the back.

Starting from the rack, wedged under the bar, lift it with the push of the legs and, keeping the core rigid, take a step or two back (no more, which is a waste of energy) and go down under the parallel without lifting the heels!

The same procedure is done as in the air squat but holding a barbell. It is very important to keep the elbows upwards by supporting the bar in front of the body, precisely above the chest.

Do the squatting movement, keeping your back straight, elbows high and feet hip-width with your toes slightly out. Never take your heels off the ground!

We have created an article  for the perfect execution of the Front Squat.

A very difficult skill; it is recommended to try it only when you have mastered the air squat and the front squat perfectly.

It is a perfect movement to train the core, as it will take all the abdominal contraction to conquer the lift and go below the parallel.

The position? Barbell above the head, in line with the shoulders, pelvis and knees. Compared to the head, the load is slightly further back to allow for a more controllable “joint”.

To improve the movement we suggest reading our detailed article onOverhead Squat. 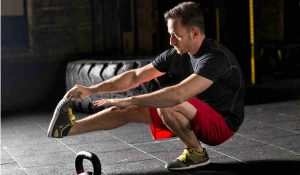 Another of the skills considered difficult is a more advanced mode of exercise: it must be done with one leg stretched forward.

You have to extend one leg at about 90 degrees to the body and squat below the parallel.

Since many have difficulty in performing it, we have created a simple guide to get to do the feared ones Pistol Squat,

Also called sumo deadlift, is done with the legs well apart, the feet slightly out and the trunk straight. Here, too, the upright posture must be maintained and descend to the parallel and then start again.

This exercise trains one leg at a time. To do this, place one foot on a rise (a bench, the wooden box), lean your torso forward and flex your knee up to parallel.

Return to the starting position and repeat. Do this with both your right and left legs. If you still have doubts read the full article on Bulgarian Squat!

Benefits: It mainly trains the thighs, especially the quadriceps and glutes.

Although it is considered another CrossFit® skill, i Lunges (or in Italian, lunges) they belong to the squat family as they train the same districts.

With your feet aligned behind your shoulders, step back with one of your legs. Keeping your torso erect, flex your knee almost until it touches the ground and rise.

We have activated a lot of discounts on Amazon: from 30 to 70% on all sports categories! It's all on our dedicated channel

Cow's milk or vegetable milk? What is the best for our health?

Do you want to have abs of steel? It starts from here

Flat bench firm to the chest

Ladies Lift: The 5 Exercises All Women Should Do

Make pyramids, they said ... but are they really needed?

7 days as a beginner of the calisthenics