The Queen of the Games never disappoints us. After a excellent result in the last Rogue Invitational, Tia Clair Toomey-Orr is now training for the next Games.

The athlete, however, does not keep his preparation a secret. In fact, on the his Youtube channel, you can find interesting videos, like hers morning training session:

This video shows Tia training for the Rogue Invitational 2021, at the CrossFit® box in Lake Placid, NY with her husband and coach Shane Orr.

Who is Shane Orr?

According to some interviews released by Shane Orr, it was he who actually first introduced Toomey to the CrossFit® world.

Since before his first appearance at the CrossFit® Games in 2015 (where he achieved a second place) to date, Shane Orr is his coach.

Not long after Tia started CrossFit® in 2013, the famous Australian weightlifting coach Miles Wydall heard of a truly energetic 19-year-old woman with incredible core strength, but not the best technique.

Wydall saw potential and, working together with Orr, turned Toomey into an Olympic-class athlete.

With only 18 months of dedicated weightlifting training, she qualified for the 2016 Rio Olympics and placed 14th in the 58 kg weight class with a total of 189 kg.

He continued his weightlifting training and gained one as well gold medal at the 2018 Gold Coast Commonwealth Games, with a total weight of 201 kg.

Although she didn't try to qualify for Tokyo (she was a little busy collecting AI wins  CrossFit® Games), it does not seem that his Olympic successes are over.

In December 2020, Toomey-Orr announced a temporary transfer to South Korea to train with the Australian bobsleigh team, who recognized her athletic prowess and invited her to join the team.

Ha won his first race at New Horizon in South Korea last February and has stated that he wants to participate in the 2022 Winter Olympics in Beijing.

Tia-Clair Toomey-Orr's morning workout consists of clean & jerks, a couple of metcons, some ancillary jobs and ending with some strength exercises for the upper body. 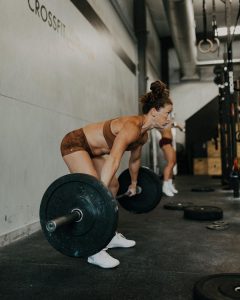 Note: Neither Toomey-Orr nor Orr shared the number of sets, reps, or weight for each exercise.

By the way, we have activated a lot of discounts on our Telegram Fitness & Sport channel: from 30 to 70% on all sports categories! Find it all here

Buttocks volume: exercises and strategies to increase it

Red Meat vs Protein Powder: which hurts the most?

CrossFit: What You Need to Buy to Get Started - Part One

6 reasons to do CrossFit®